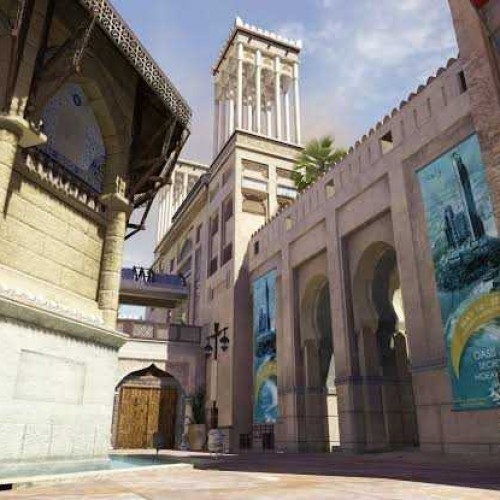 The official Instagram account of Call of Duty Mobile posted a picture at around 10:00 p.m. on 10th April.

It was captioned as: "A final stroke of the brush... and that should do it!

As expected, the comment section flooded with comments about the map. Almost everyone identified the "Oasis" map. Some fans went on debating about whether the devs should remove the old maps or not.

All right, the "Oasis" made its first debut in the Call of Duty Modern Warfare 3 as a Multiplayer map. It was one of the largest maps of Modern Warfare in 2019. The "Oasis" is set in a hotel, or luxury resort in Dubai. Trees, Clear Sky, Blue Water, and Skyscraper Buildings make the map look beautiful. There was also a sandstorm spotted outside the map.

However, at the very beginning of this year, "Oasis" was again introduced to the Garena Version of Call of Duty Mobile. Fans and players have anticipated it in the Global Version since then. It's like finally, the prayers are being answered.

Through the leaks after the Season 2 update, it was quite a bit clear that the "Oasis" and "Coastal" maps were to be re-launched in the upcoming seasons. The guesses were going on.

But after last night's post, it is clear that Activision is going to deliver "Oasis" to its global audience.

Coming to the map, Oasis seems to be a nice, almost perfect place for Domination matches. Since the map covers a large area so it can easily provide three locations for that. Moreover, the vast area provides players plenty of place and nukes, and corners to attack their enemies or to dodge the bullet shots.

Not only Domination but other multiplayer matches like FrontLine and HardPoint also, are worth giving a shot in there.

Also, in its first debut, "Oasis" allowed the players to go underwater inside the pools. We are not so sure whether this feature will be available for players in the mobile version or not.

Although the developers never mentioned the name in their post, it was an easy guess. Considering most of the audience of CoD Mobile are familiar with PC versions and the Chinese or Garena version too, they threw it in the air.

All of us can agree to the fact that the size of the game is way too much large. And some people even have to remove other apps just to play the game. (Some people stopped playing when the game started to play with the device storage, you know!)

But everything comes with a price (not Captain Price). And here we have to pay by our storage.

The next Seasonal update is set to be due on 14th April, i.e., three days from now.

The "Oasis" is surely appearing in the next season, though the "Coastal" map is left hanging in the air. But since we still have three days i.e., 72 hours more, we can just wait and watch what the devs have for us in their bag.